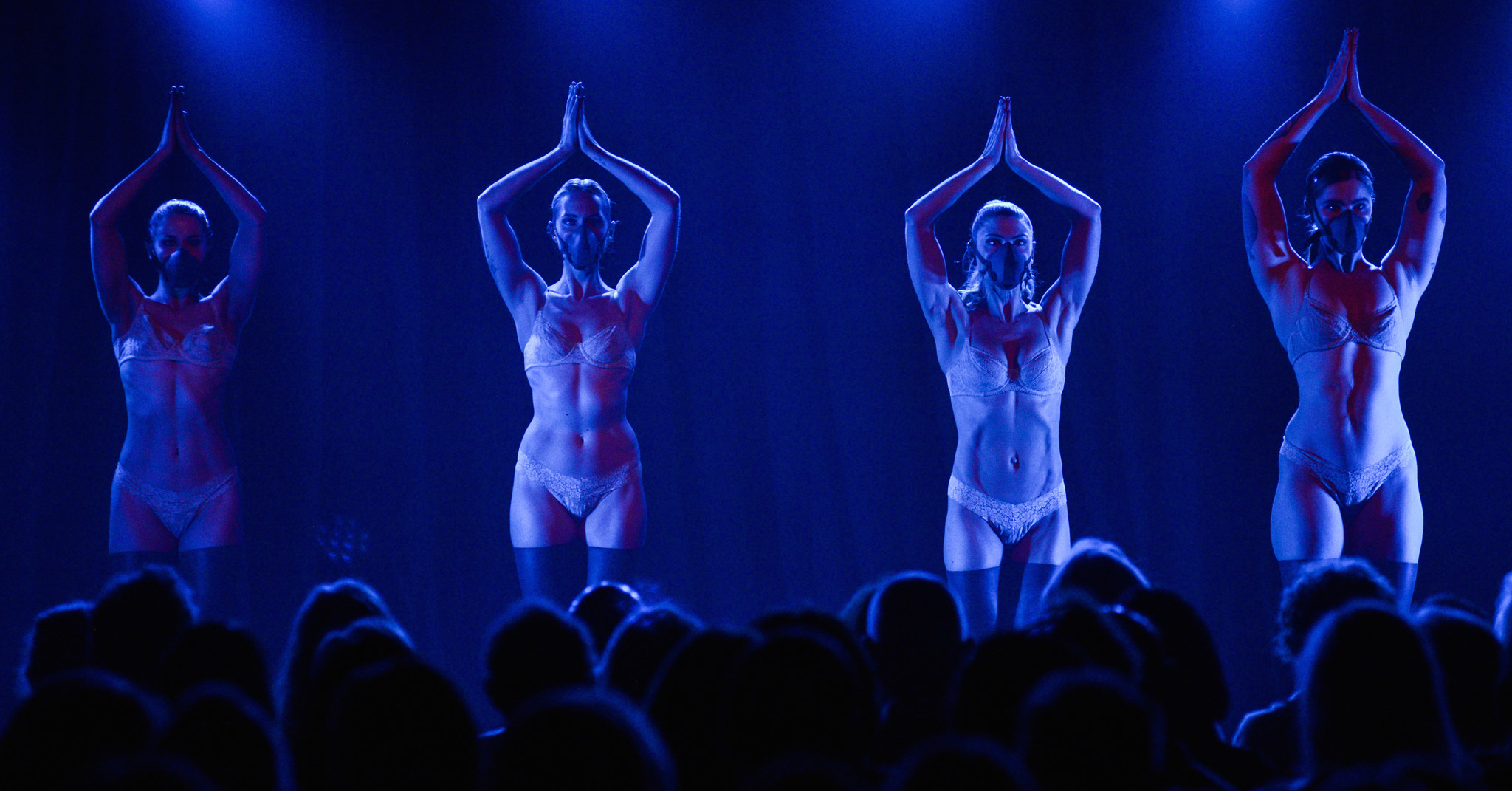 “In Flagrante is a sexy, thought-provoking, sensual experience and I can’t wait to see where they go from here”   Frodo McDaniel – Broadway Baby (UK) 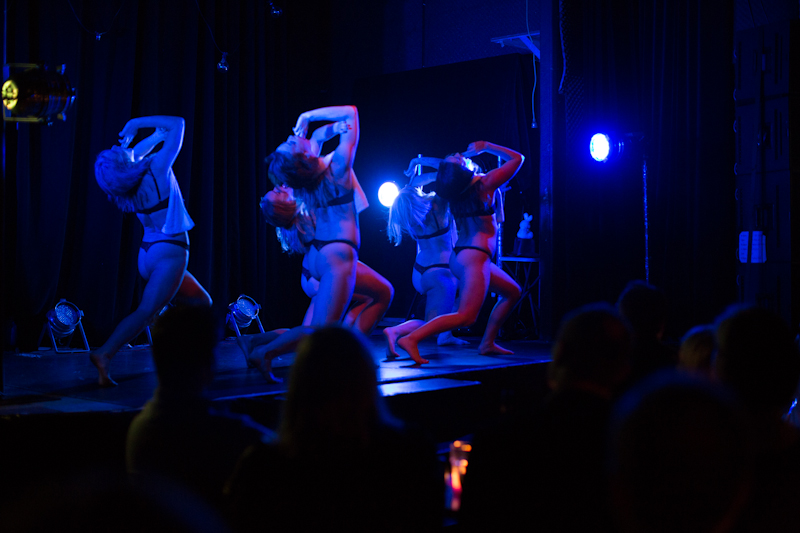 A real hit at the 2013 Edinburgh Fringe Festival and ‘spotted’ there for an exclusive one-off private performance in the Seychelles, Auckland New Zealand based In Flagrante (Latin: “in blazing” and once grounds for divorce) sets fire to your seat and offends your sensibilities – in the best manner possible.

A band of protean, antipodean women bridled, saddled, and ready to pounce – they quickly set the stage for an evening of skin and sass. This isn’t your grandpa’s burlesque. In Flagrante’s hyper athletic cast turns the tradition on its head with a frontal assault on female sexual stereotypes.

In a series of highly sexualised and deeply satiric comedic pop art vignettes the cast act out prevailing fantasies and fetishes embedded in the popular imagination. And heads really turn when they flaunt their leather bridles, marching gear and traffic girl uniforms.

The result is an exhilarating and provocative show of female empowerment and high impact dance theatre. 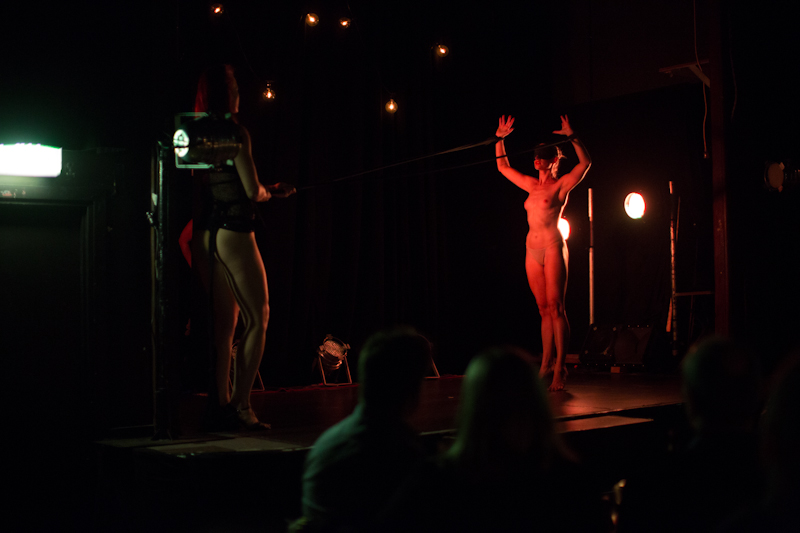 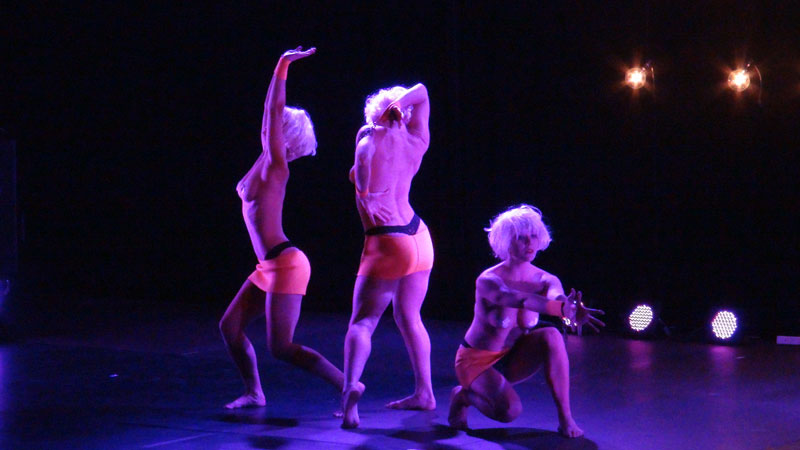 In Flagrante embraces this eclecticism in fascinating and at times wickedly funny ways. With a rich, borderless movement vocabulary to draw from and the cryptic satiric eye of the contemporary dance choreographer, O’Reilly weaves tango influences with touches of vaudeville, slapstick with cabaret, jazz dance with stand­up comedy.

“If you’re a contemporary dance fan, you’ll adore the captivating choreography and precise physical and cerebral execution. Be prepared to be surprised ­ if not a little shocked. If you’re not a dance fan, you’ll love the gorgeous sculpted dancers, the humour, music and daring minimal costumes, in all its slick, naked darkness and glory.”

Mary Jane O’Reilly has had a professional career spanning over 30 years both in New Zealand and internationally. She has received numerous grants and awards including the $30,000 Allen Highet Award for outstanding achievement by a mid-career artist and was awarded a Queens Service Medal for her services to dance in 1990.
MaryJane was a co-founder, dancer, choreographer and Artistic Director of the highly acclaimed Limbs Dance Company (1977 – 86) for whom she created over 45 works. 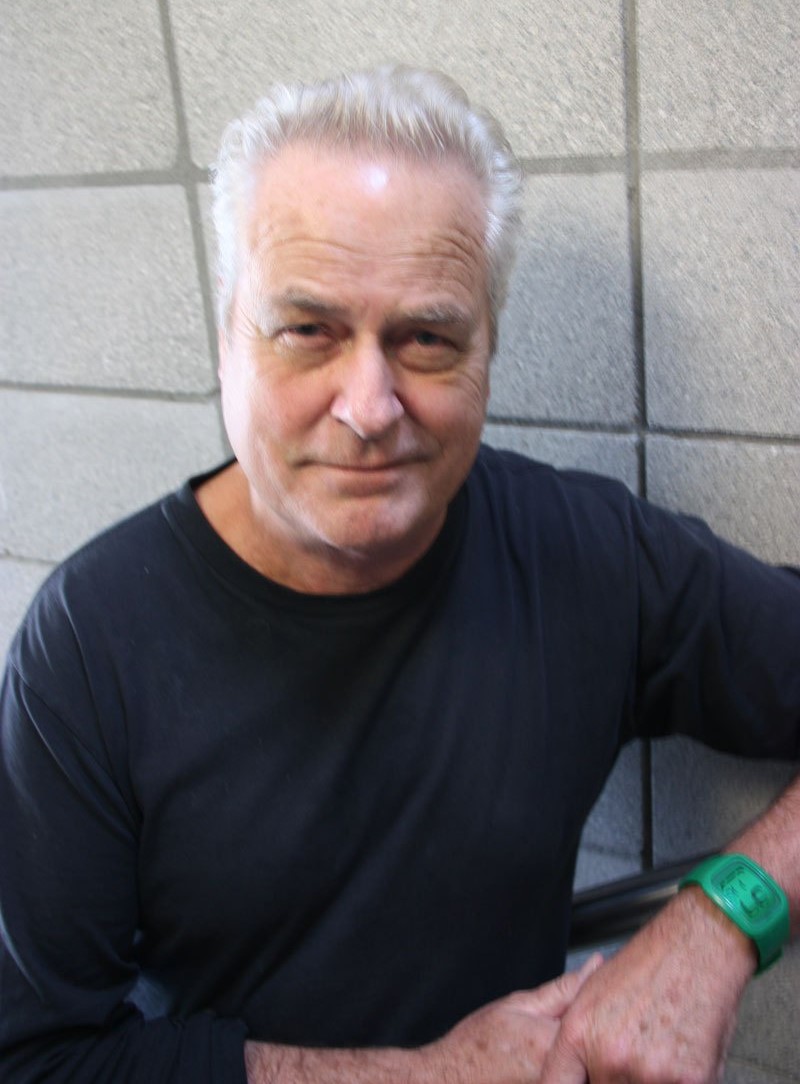 Phil was born and educated in Wellington, and graduated with a Diploma of Graphic Design from Wellington Polytech. After extensive world travel meeting his wife MaryJane in London on returning to New Zealand MaryJane went on to co-create Limbs Dance company with Phil working in close partnership on performance concepts, set and costume design, staging work and creating their signature marketing images. He worked with both MaryJane and Limbs manager Sue Paterson on setting up overseas tours and accompanied them on tours to the USA, Mexico and Papua New Guinea. 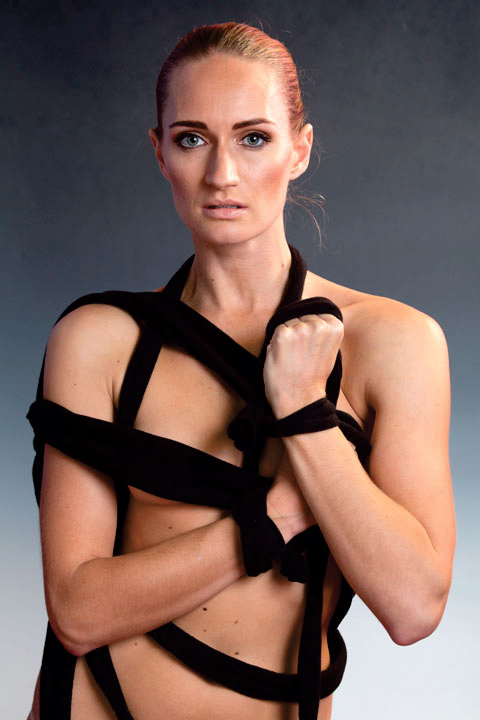 Maria graduated from Unitec Performing and Screen Arts with a contemporary dance major in 2007 and went on to perform in short works for Late Night Choreographer's and Tempo. In 2008 she moved to Australia, and in self proclaimed gypsy spirit after a few years of drifting, trained and taught as a yoga instructor in Byron Bay. After returning to NZ in early 2011 Maria was thrilled to join MaryJane for In Flagrante. She has performed in Gogodo (winner) for Short and Sweet Dance Festival 2012, and is currently doing cabaret dance work with La Belle Follies for various events as well as performing fortnightly at the ever 'flagrant' DNA bar on K Rd. In 2012 Maria was involved in two dance projects for 'En Route' and a development workshop for Okareka Dance Company. She also works and models for WE'AR, an NZ designed/ Bali made organic yoga lifestyle label committed to ethical responsibility. 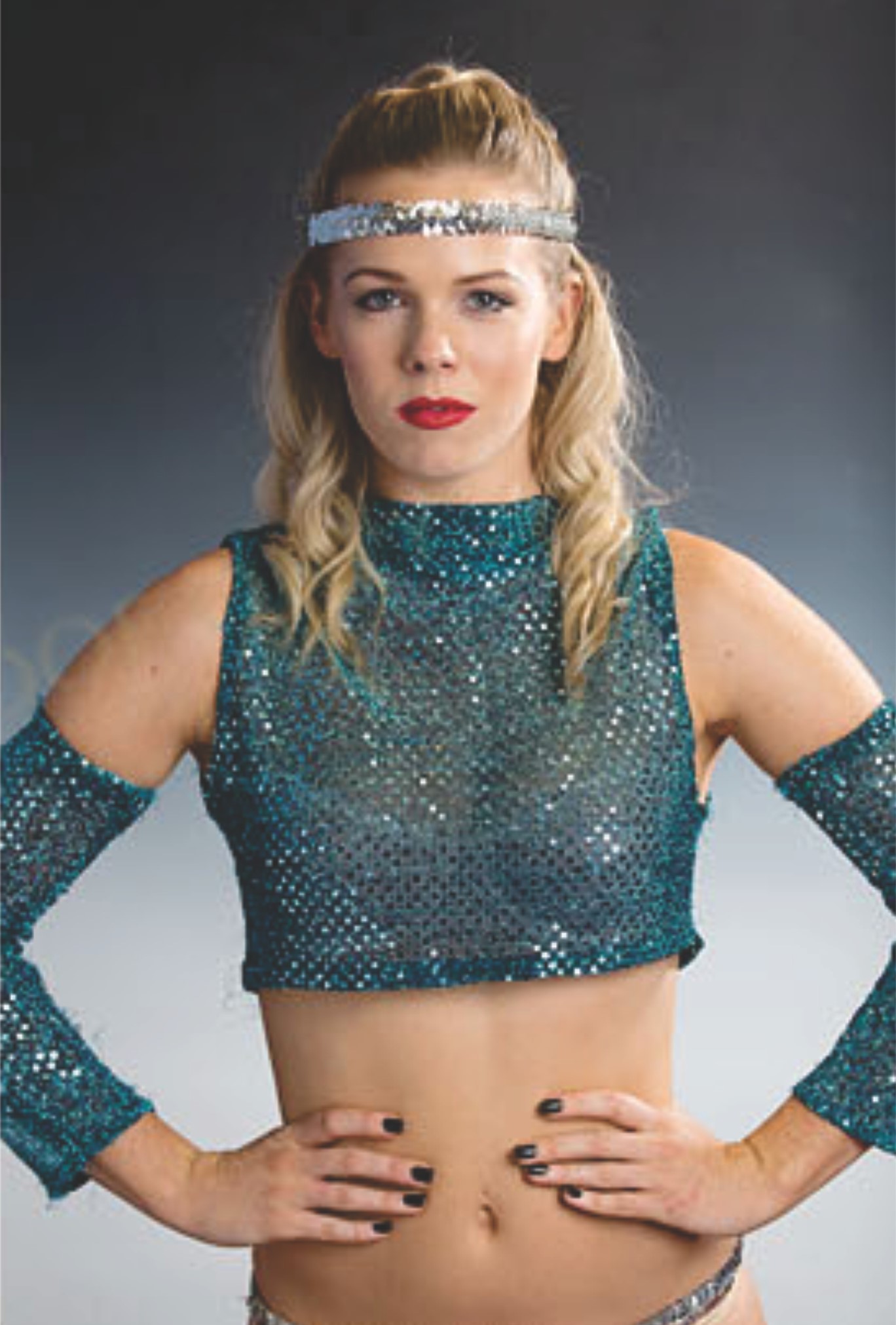 Amanda Macfarlane is a graduate of Unitec's Contemporary Dance Programme, is trained and qualified in the NZAMD syllabus, and is a former dance teacher of the syllabi.

She has been a core cast member of In Flagrante since its conception, and has toured New Zealand and the globe extensively with the Company including at the 2013 Edinburgh Fringe Festival; the 2016 Australian Burlesque Festival in Melbourne; and most recently at an exclusive performance in Germany, August 2016!

Along with this she has danced extensively for many professional productions including; SPLORE, NZ Fringe Festival, World of Wearable Arts (WoW), Tempo, Skycity Cheerteam, Soul of Siren now known as Momentum Productions, and Diva's Cabaret, now known as Encore Cabaret.

Amanda's stint in London from 2013 - 2015 led her to dance as a REAL magician's assistant; and at several other high profile events throughout the UK.

After taking ballet class on a regular basis at Pineapple Dance Studios in London, she is back doing ballet with MJ every week and is very excited to be returning to In Flagrante; the ever-evolving, super sexy and thought provoking show that just keeps on giving! 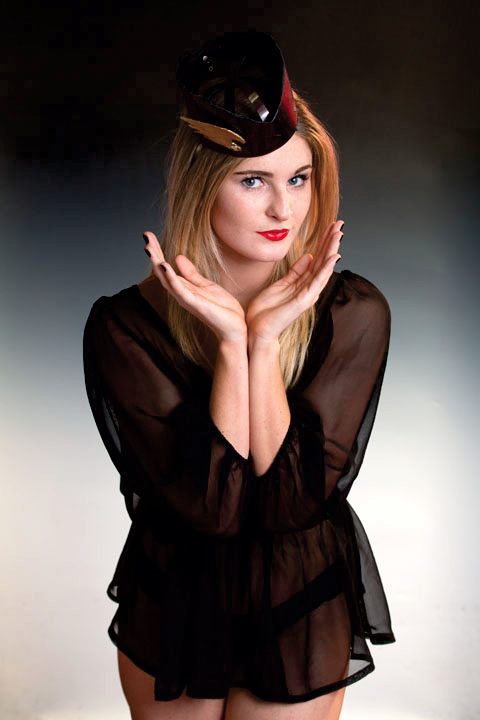 Sofia is a 2011 Graduate of UNITEC Performing and Screen Arts Degree majoring in Contemporary Dance. During her studies at UNITEC, Sofia worked with choreographers including Katie Burton, Michael Parmenter, Shona McCullagh, Sarah Foster-Sproull and Tim Podesta. Sofia has co-presented and performed two works with Treat Station collective for the 2012 Short + Sweet Dance Festival and The Producing Project’s En Route series. She has also performed with Black Sheep Productions in the Dunedin Fringe Festival earlier this year as well as the Christchurch Body Festival. In October 2013 Sofia performed in Tempo Dance festival in Auckland dancing in two different works in the Fresh Cuts category. She is thrilled to now be a part of such an exciting and edgy show with great people. 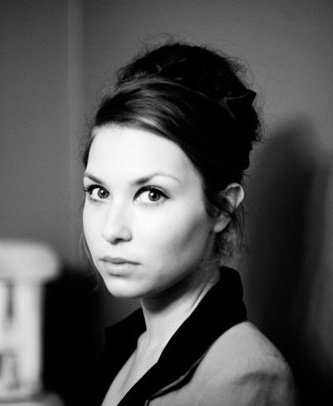 Olivia Tennet has been training in dance since the age of 4, and performing professionally for over 15 years. Liv’s professional dance credits include GUYS AND DOLLS and STEPPING OUT with Auckland Theatre Company, X FACTOR NZ,choreographing and performing with The Naked and Famous and most recently choreographing the hit show THAT BLOODY WOMAN. She has also appeared in various NZ and Australian TV productions including, WHEN WE GO TO WAR, THE ALMIGHTY JOHNSONS and the new series 800 WORDS. Liv has gained her final Solo Seal qualifications in tap and jazz, both with Honours. She was awarded the top marks in Australasia for six consecutive years. She is now a core dancer for Momentum Productions, NZ’s leading commercial dance company. After living in LA for 2 years, Liv returned to NZ in 2013, and is currently studying Speech Therapy at Auckland University. 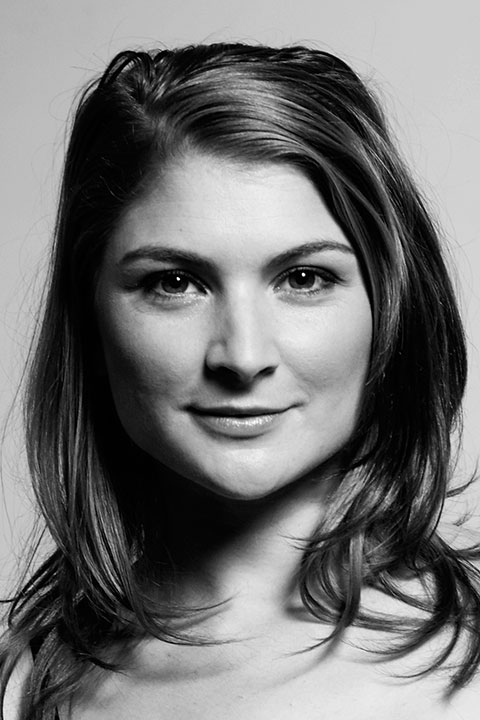 Julie van Renen graduated from UNITEC with a bachelor of performing and Screen Arts majoring in Contemporary Dance in 2003. Since then she has been working as a freelance dancer, choreographer and teacher. Her freelance career has given her opportunities to work with many choreographers such as Megan Adams, Clare Luiten, Julia Milsom, Wilhemeena Gordon, Morag Magnolia Brownlie, Jessie McCall and Carol Brown. Julie has also performed with Backlit Productions and is a long standing member of Spinning Sun Dance Company under the direction of Ann Dewey. The company have performed nationally and internationally in various Arts Festivals. 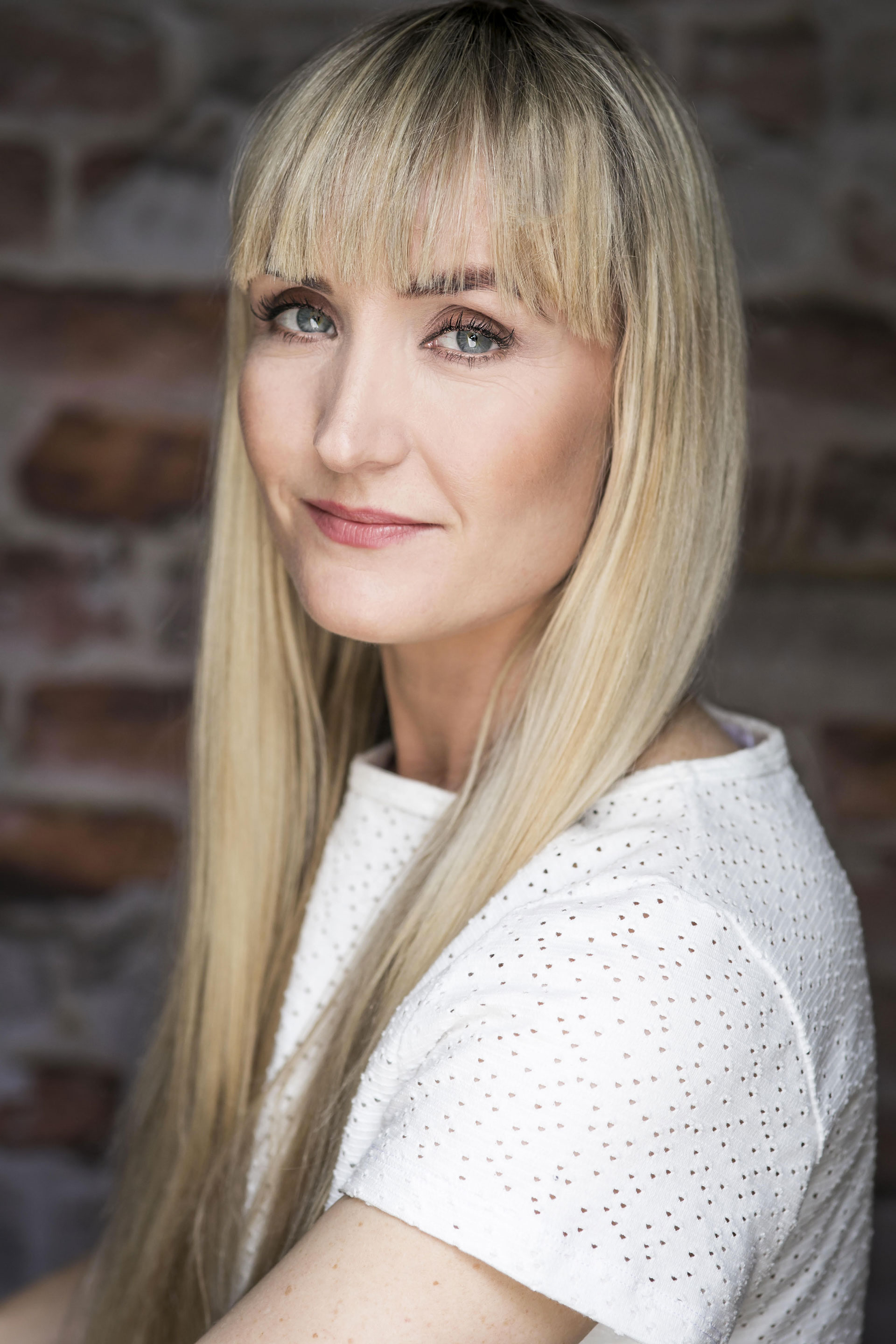 Shanelle Lenehan started dancing at the age of twenty completing her dance studies at the University of Auckland in 2005. Over the next 10 years she went on to work as a dancer and sometime rehearsal director for various companies including: World of Wearable Art, New Zealand Dance Company, Company Z Dance, New Zealand Opera, AUT, SKYCITY and The British Council.

Shanelle has also worked for numerous choreographers in independent work performing internationally and throughout New Zealand in festivals and shows. Career highs include performing at the Edinburgh Festival in 2013 with Mary-Jane O’Reilly's 5 star rated show 'In Flagrante' and travelling to countries around the globe including, India, Kuwait, Qatar, Norway, Germany, Netherlands, Seychelles and the UK to perform. Most recently Shanelle performed as a Dancer/Singer/Actor in the sell out show 80’s musical hit ‘Pleasure Dome' starring Lucy Lawless and in 2019 ‘The City of One Hundred Lovers’ directed by Tony Stimach. Shanelle is mother to daughter Portia born 2015 and has been a Pilates instructor since 2008. She is currently a Pilates Mentor with Polestar Pilates NZ.

All imagery, content, shows and performances represented on this website are owned and copyrighted 2013 by MaryJane O’Reilly

Music Info for In Flagrante dances

Green Girl – Music ‘Devil at my Door’ by Emilie Simon

Nurses – track ‘Why did you Fire that Gun’ *

From the toxic utopia of ‘Our Day will Come’ ….

Whip solo, parodying the contradiction of the perfect wife and the whore. Words drawn from a 1950’s treatise on marriage and domestic bliss.

Horses – satirising the sexuality of being in the saddle and bondage.

Blindfold – inspired by Freda Stark the ‘40’s Golden Girl, Erte magazine covers and the Spirit of Ecstasy on the bonnet of the Rolls Royce.

A North Korean Traffic girl solo with an attitude problem explores women in uniform, as signallers and authority figures who subvert and override the male construct.

The ex Great Redondo–A magician’s assistant turns the tables on the great man himself.

Addiction solo – Eve as a cigarette girl addicted to her apples as a metaphor for knowledge? sex?

Black and Blue – has imagery inspired by the ’70’s Clockwork Orange movie, a dance that satirises the capacity for bullying and violence.

Make my Day – a solo inspired by the 2nd World War Bomber Nose Art, Vargas Girls and Pan Am Air Hostesses. The glamourous, neurotic world of women in the air. Finally evolving into a 21st Century Woman in control of her own physicality.

Nurses –  an excursion into deep fetish, from colonics to inoculations. A tribute to nurses as sex objects, Bond Girls and custodians of bodily functions.

Pikelet – a wholesome recipe from the Edmonds cookbook for a satisfying life, from the deeply sexist annals of Aunt Daisy and her home cooking wisdom.

Punk Cancan where it started out; raucus, raw and raunchy.

Summertime is performed by the full cast. Tennessee Williams meets gym bunnies. A saga of sweat, sex and satisfaction.