Last year we spent a lot of time writing descriptions for the dances for APRA and we actually really enjoyed articulating in writing about the pieces. We – as in myself (the choreographer) but mainly Phil ( conceptual and design) with his eloquence! After all this time, seeing them performed, seeing the audiences reactions, we understand these pieces much more… and I’d love you to read them…esp if you have seen In Flag!

In Flagrante show dance title: MEMORY (First performed at the Butterfly Club in Melbourne, May 2018)

A solo dance work inspired by Laurie Anderson’s gift for powerful deeply evocative narrative and imagery expressed in her hauntingly unique voice.  The dancer is seen as a stateless bird, looking for a safe place to land; a place to belong. The Lark presents a solution. A reconciling territory of the mind, a site to bury the memory of patriarchy… a new beginning with a fatal trap. The choreography and sub text is hugely influenced by New Zealand’s unique pre human solitude as an island archipelago of just birds and ‘spirits’ in a vast empty ocean. The movement derives from the motion of bird wings and the flight of ‘poi’… stringed woven orbs used in traditional Maori women’s dance and ritual.

This dance is a solo comedic work inspired by the rhythmic circus quality in the music and the vocals as an impresario or ringmaster introducing an act.  The character satirises the perennial magician’s assistant. Never the magician, the eternal female second fiddle to the main (invariably male) act. In Redondo’s case the assistant takes over in an impudent rebellion. She performs various feats of faux magic which become progressively more outrageous and hilarious. To her final ‘piece de resistance’… pulling the severed head of the magician himself out of the magic box. 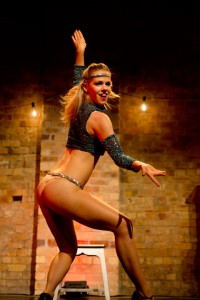 Taking Botticelli’s timeless ‘Venus on the Half-Shell’ as the prototype virginal image of the female form and eternally giving persona. This solo work cuts across this popular cliché with Cave’s hyper edgy riff on promiscuity and sexual danger on the south coast foreshore. Where the stones meet the sea. A metaphor for the unstable boundary between hope and hopelessness. Between anger and forbidden pleasure.  And the relinquishing of fragile beauty. 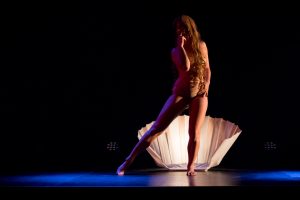 In Flagrante show dance title:  VALHALLA (First performed for NZSD Oct 2017, then for In Flag at The Butterfly Club 2018)

Taking the anarchical impetuous driving rhythms of Trouble’s masterly unsettling ‘Snake Eyes’ our Steam punk super heroine fights her ground in a frenetic dance for survival against the forces of destruction. Morphing to David Lynch’s dark and moody ‘Cold Wind Blowin’ Valhalla presents a ragged female survivor of an apocalyptic battle. In an act of triumph and supplication she sheds her armour to reveal the essential wounded woman within…a bittersweet victory stripped to the bone. 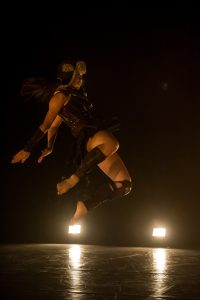